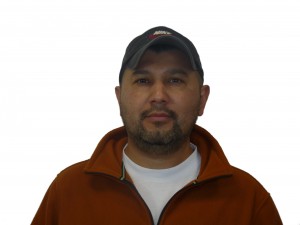 His favorite color is white and his sign is Cancer. When he sits down for a meal, he enjoys savory Salvadoran Food but doesn’t mind polishing off a great Salvadoran meal with a piece of cheese cake.

He was born in El Salvador but came to the US when he was sixteen. He is now married with four children and he lives in Phillipsburg, New Jersey.

His hobbies include watching movies and all things music. When he’s not working at Special T’s Hector his favorite things to do are playing with his children, doing things with his family and spending quality time with his wife.

Hector does not like to stand still or waste time, he prefers to be creative. If he were going to be a super hero he would be Superman, because the world needs superheros.

His guilty pleasure is eating cookies and his favorite television shows are: Undecoder, The Universe and UFOs. His peeve is watching someone not be treated fairly and his beverage of choice is Scotch Whiskey.

If Hector won the lottery he would travel across the world, help the less fortunate and add additional guilty pleasures to his list.