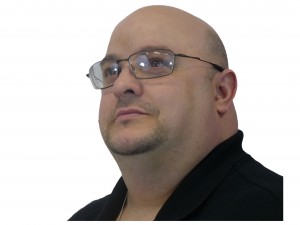 Ed joined Special T’s in 2010, he is our manager of Operations. Ed’s responsibilities include managing the online store program, social media handling all supply needs, customer service, invoicing, interviewing … OK, pretty much everything.

Ed lettered in Football, Wrestling and Track while also holding the position of President of the Hamilton Law Enforcement Explorer’s Club. Two weeks after graduating, Ed joined the U.S. Army. He was a 96R Ground Surveillance Systems Operator out of Ft. Leonard Wood, Missouri. After graduating from Airborne school, Ed was assigned to Ft. Ord in California. He was assigned to divisional support for the 7th Infantry. Ed served in Operation Desert Storm and he was present to witness the historic East-West German border come down. Everything else is classified. Ed could tell you but then he would have to kill you. In all seriousness, Thank you to Ed for his distinguished service to our country.

Ed’s favorite color is burnt orange and he is a Gemini. Ed enjoys a well crafted pizza and he enjoys polishing off a fine meal with a nice slice of key lime pie.

Ed and his wife live in Flemington and with their son (affectionately known as Stormageddon) they also have a cat of questionable background.

Ed’s hobbies include target shooting, hiking, skiing, reading and outdoor photography. When he’s not working his favorite things to do are having fun with his wife and son, reading and watching football.

Ed doesn’t enjoy doing laundry, picking up after other people or sitting on the couch to watch anything labled “Romantic Comedy”. If a zombie isn’t eating someone, a vampire isn’t sucking someones blood, or someone isn’t being shot or kicked in the head, Ed doesn’t want to hear about it.

If Ed were going to be a super hero, he would choose Batman. Since Batman doesn’t technically have super powers but is still focused on doing the right thing to help others, he’s the guy to be. Plus, Ed wants a cool utility belt.

Ed’s favorite quote is “Don’t be an oxygen thief, do something with your life”. Ed’s guilty pleasure is watching Mystery Science Theater 3000 where mocking bad movies is at it’s finest. His three favorite television shows are: The Walking Dead, The Office and 30 Rock. When he grew up, Ed wanted to be a Park Ranger.

Ed doesn’t have too many peeves, but his worst peeve is when people act or behave in a way where they show no concern for other people around them, especially when people talk in the movie theater.

Ed doesn’t always drink beer, but when he does, he prefers Dos Equis. Stay thirsty my friends (no copywrite infringement intended) Every one in a while, Ed will also throw back a Mike’s Hard Lemonade.

If Ed won the lottery he would restore a 1970’s Chevy Nova for his wife, Secure an education for his son and set up funds for his family for the future.

Ed’s T-Shirt slogan would read “I’m Ed, ask me how you can be too!” Franchise opportunities available.