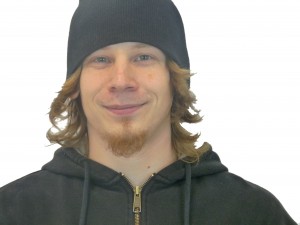 Mike joined AMBRO in December of 2007. His primary role is being the Manager of Shipping & Receiving, but he also serves many other critical roles here at AMBRO including but not limited to: Digital Printing, Embroidery, Inventory (when he feels like it), research, customer service, laser cutting, rhinestone design and Information Technology. Mike is the grease that keeps this place running. He also comes up with really good ideas in our Monday staff meetings. Mike is one of those guys that has mad skills in multiple areas, he’s a true “Mike of all trades”.

When he’s not working here at AMBRO he enjoys staring at his favorite color Blue and working on his cars and his jacked up, liquid cooled, super WOPR of a PC. Seriously, the thing receives it’s own electric bill. His sign is Cancer and he enjoys bacon and Funfetti® Cake with Funfetti® icing.

Mike has 1 sister, 2 cats and considers himself a Geek or Nerd at heart. But I can attest that he’s got social skills, so he’s more of a hybrid Geek, like 50% Geek 50% Cool. Well maybe 90% Geek, 10% cool … but I digress. Mike is one of the most honest people that you’ll ever meet, he’s the quintessential good guy. We like him. Well … most of the time.

When asked about his top 3 least favorite things to do, Mike said “you’ll know when I don’t do them”. But I’m pretty sure inventory is in there.

Mike’s guilty pleasures include listening to metal and hard rock and he’s been known to enjoy some K-Pop.

His top 3 favorite TV shows are:

He still hasn’t figured out what he wants to do when he grows up, but he’s working on it. His biggest peeve is when people lie.

When enjoying some downtime, his favorite beverage of choice is hops flavored water. For those uninitiated, that’s beer.

If he won the lottery, Mike would quit his job, build a house and fill that house with expensive toys and if he were going to make his own T-Shirt it would say “How hard can it be?”