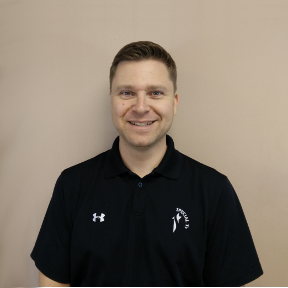 Ryan Amato joined Special T’s in 1994 when we were still operating our of Bob’s basement in Flemington. Ryan’s responsibilities include Operations, Sales, Facilities and Layout & Design.

Ryan is a Leo, his favorite food is Italian and he loves to polish off a good meal with angel food cake with whipped cream and strawberries.

Ryan and his wife live in Flemington with his two sons and dog Bailey. When he’s not working at Special T’s, he’s either out fishing, attending a basketball game or flying with his flight instructor.

If he was given the option to be a super hero, he would choose Iron Man, because let’s face it, Iron Man is cool. His guilty pleasures include reality TV, go karts and watching movies.

Ryan’s favorite TV shows are : Chopped, Storage Wars and Shark Tank. While he enjoys working at Special T’s, he really wanted to be a bulldozer driver. His biggest pet peeve is when someone doesn’t follow through on a commitment and his beverage of choice is Crown Royal.

If he won the lottery, there would be a 60 foot speed boat in his driveway the next day and the following week it would be in the water, tied to his dock behind his new shore house.

If he were going to make his own slogan T-Shirt it would say “Stop reading my shirt and get back to work.”